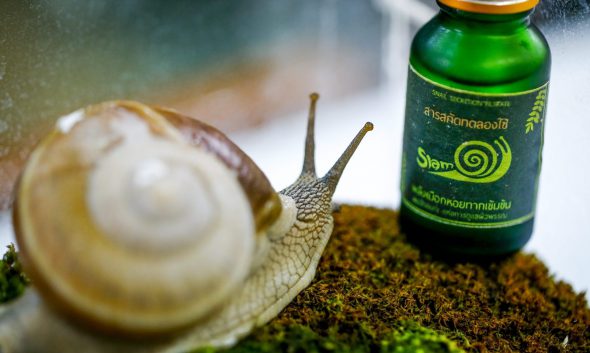 At chemist’s shelves we can come upon cosmetics with snail slime. It is an ingredient particularly liked by Asian brands, which isn’t that surprising taking into consideration unusual Eastern traditions. Does snail slime really work? Yes, because it consist of many positive ingredients, which indicate beneficial properties for skin.

How is snail slime acquired?

To acquire valuable snail slime with a gel texture are used breeding snails, which are cultured for the cosmetic products. Slime is produced in snail glands, which are placed under its foot. What is extremely important is that breeding snails aren’t harmed while acquiring slime, because it goes ahead non-invasive.

What is the secret of snail slime?

Many people are disgusted by the idea of placing on their face something like snail slime. It is worth to read a bit about its properties, and you may surly be convinced about cosmetics with slime. Snail discharge has  strong regenerative properties, what can visibly improve skin condition. It is because of high content of vitamins (A,C and E), allantoin, glycolic acid, elastin and natural ingredient of human skin, i.e. collagen.

For what to use snail slime cosmetics?

The popularity of snail slime cosmetics doesn’t come out of nowhere. More and more willingly we use this Asian beauty secret. What sort of problems do the cosmetics with high amount of snail slime solve? There is at least eight of them (though, there is much more), because snail slime:

Snail slime is an honorary ingredient of many rejuvenating serums, face creams and face masks.